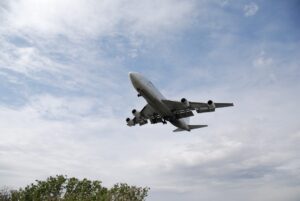 The endless lines for customs checks. Strikes by air traffic controllers, pilots and a huge staff shortage at airlines’ cargo handling and distribution centres. Of course, all this also had its effect on your air cargo shipments. 2022 was certainly not a dull year for Ritra’s air cargo team in Oude Meer! What is currently at play at the Netherlands’ largest airport, what influence do politics have and what are the expectations for 2023?

After the outbreak of the corona virus in Europe, the impact it would have on the transport sector was unforeseeable. Air freight was hit especially hard. Space was scarce and rates were sky-high. When this was barely behind us, strikes and staff shortages were added in 2022. The last few years have certainly not been easy for the airline industry. However, one way or another, air cargo always marches on.

Some peace now seems to have returned to Schiphol. Although current capacity is tight, it is workable. Supply and demand are also now more balanced. But even now, of course, things do not stand still. A review of Schiphol’s regulations, for instance, promises to put extra pressure on the situation.

Cabinet is keeping a careful watch

A discussion has been launched from Brussels regarding the current slot regulations. Infrastructure minister Mark Harbers is calling for reform of the EU slot regulations. With the aim of maintaining the established freight position compared to the rest of north-western Europe. On behalf of the Dutch government, he suggests that when allocating slots (an agreed schedule of unloading and loading times), a distinction should be made between passenger and cargo flights.

The current slot rules do not permit distinguishing between different flights, while these are two different markets, according to Harbers. He wants to prevent cargo flights from being further crowded out by low-cost consumer flights at all times. Due to the strict 80/20 ‘use it or lose it’ rule within the EU, 80% of flights must be flown as agreed in the slot. This is difficult, partly because of the many stopovers.

Air cargo carriers therefore increasingly have to divert to neighbouring countries. Thus, it frequently occurs that lost cargo slots at Schiphol are nicked by other European airports. In addition, it slows down when cargo has to be driven to Schiphol from other European airports. The cargo itself continues to arrive at Schiphol anyway. In the summer months, this can cause delays in transit and handling at handling agents. Of course, involved umbrella organisations like ACN and Schiphol Airport, are already diligently looking for solutions to get ahead of problems.

Supply somewhat balanced again, new price drops on the way. Shippers are patiently waiting to see what the future holds. This also explains the large number of price agreements currently being concluded, which consists almost exclusively of short-term deals. Air cargo analyst Clive Data Services, part of Xeneta, recently published that even 98% of recently concluded contracts are shorter than six months in duration.

Shippers, after recent years of sky-high freight rates, prefer not to commit for a longer period. The 2023 market is uncertain. However, load factors are expected to resemble those of 2019, the period before corona. Whether prices will fall as sharply along with it remains to be seen. But shippers can breathe a sigh of relief. We can finally say goodbye to the extraordinary rates that were very common in the last two years.

Want to give it a try?

Wondering if air freight is something for your goods too? Or do you have questions about the current situation in air freight? Then get in touch with Team Ritra Schiphol. Rob, John, Mike, Karina and Jessey will be happy to tell you more!