You are here: Home > News > Capacity problems in Q4 due to switch to low-sulphur fuel

Capacity problems in Q4 due to switch to low-sulphur fuel 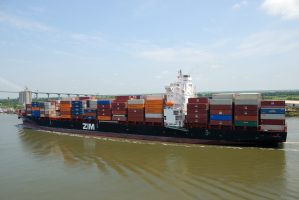 On 1 January 2020, the worldwide switch to low-sulphur fuel in shipping will become a fact. In the meantime, container ships will have to be prepared for this. This means a large number of these ships need to be temporarily taken out of service. In addition, significant fuel surcharges have been announced to cover the extra costs for low-sulphur fuel. This will likely result in serious capacity problems in the fourth quarter of 2019.

There are two main ways for container ships to comply to the new regulations by the International Maritime Organization (IMO). The most straightforward solution is making the switch to low-sulphur fuel. However, it is possible to keep using the current fuel types if a so-called ‘scrubber’ is installed. Scrubbers remove the soot particles from the fuel.

It is estimated that 95% of all ships will start using low-sulphur fuel. In order to avoid mechanical malfunctions during the implementation, the tanks of these ships will have to be emptied and flushed first. This takes about 7 days. Installing a scrubber takes far longer; 30 to 40 days on average. However, only a small number of ships will make use of this.

Shipping companies will most likely spread the adjustments over the last 2 to 3 months of 2019. Ships will be taken out of service by turns, so the impact on the sailing schedules is not too significant. Usually, ships will miss a single sailing. In some cases, they will be replaced by a ship that is not being used at that time.

The new IMO regulations will cause a significant increase in fuel costs. Shipping companies expect an increase of $10 to $15 billion per year. This is why they have announced they will charge an extra fuel surcharge starting 1 January 2020. This is expected to come down to about $200 to $300 per TEU.

Due to the new fuel surcharge, we expect many forwarders will want to ship their goods before the end of 2019. We therefore expect an enormous increase in the number of bookings. Combined with the reduced number of sailings and the traditional end-of-year rush, this will likely result in serious capacity problems. We advise you to take this into consideration when making your planning.