You are here: Home > News > Colleague in the limelight Peter van Herk 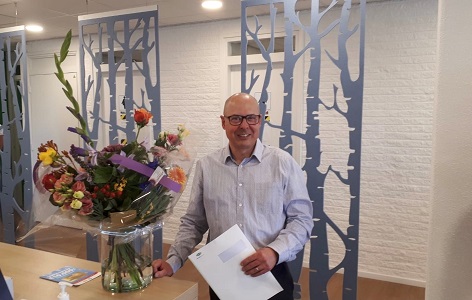 Loyal, driven employees who place great value on personal attention for customers. It is what Ritra is known for and we are very proud of it too! This month, we would like to tell you a little bit about our colleague Peter van Herk. If you don’t already know him, that is. Because he has been a familiar face at Ritra’s export department for 12.5 years. How did he end up at Ritra, what motivates him, and what are Peter’s daily tasks?

Peter van Herk. A Rotterdammer through and through. An enthusiastic colleague and dedicated ambassador of Ritra Cargo’s social media. He lives in a vibrant village in the Albrandswaard municipality and has been with Mariska for years. He is a happy father to three sons: Remco, Kevin, and Max. Two years ago, he also became Nora’s proud grandfather. And in the new year, ‘opa Peter’ hopes to welcome her little brother or sister too. As well as his work and busy home life, peter likes to get involved in photography.

A career in logistics at a glance

Peter completed his education at Jan Backx vocational college. The ultimate education provider for shipping, ports, transport, and logistics. Years ago, the name of this school was changed to the Shipping and Transport College. However, Rotterdam locals still say ‘you’re from the Backx’.

After this, Peter worked various different jobs in the logistics sector. He started his career with the Dutch Transport Bureau. He worked as a ‘cargador’ (freight broker) for different shipping companies, and even did a stint at the former East-German forwarder IMOG. He learned the tricks of the trade over the years.

Twelve-and-a-half years ago, he was approached by who was then Ritra’s Export Manager. They had worked together for a previous employer. ‘How about coming to work for Ritra Cargo?’ Ritra could use another pair of hands.

This is how Peter ended up back in shipping in 2009. The name ‘Export department’ actually sells the whole unit short. Because, as well as handling export shipments, Peter and his colleagues André and Georgiana also look after cross trades and some import shipments. In addition, they also receive spontaneous calls from shippers sometimes, like at the start of the year. As is usual in the logistics sector, good service creates the best word-of-mouth advertising.

Their daily activities are punctuated by two peaks: in the morning, there’s contact with Asia. The second peak starts from around three o’clock in the afternoon. ‘That’s when the Americans wake up.’ as Peter says.

Communication is paramount in a department like this one. Requests have to be dealt with quickly, instructions have be sent without delay, and customers have to be informed about the latest status or situation. Cross trade bookings in particular require meticulous work, with Peter and his colleagues acting as the Control Tower in the supply chain.

A recent unique cross trade shipment was a consignment of mouth masks for the NOC*NSF (the Dutch Olympic Committee*Dutch Sports Federation). This shipment came from Hong Kong and was delivered by Ritra Cargo to the Dutch Olympic Team in Tokyo.

Why Ritra Cargo for the last 12.5 years?

Peter celebrated his 12.5-year anniversary with Ritra Cargo last October. A great milestone, and certainly not unique at Ritra Cargo. We have many employees who have easily passed 10, 20, or even 25 years of service. We asked Peter why he has been happy to get on his bike to the Waalhaven for such a long time.

´Employers who are on your wavelength and are there for you´. Peter feels this is one of the main reasons for sticking together for this length of time. The move to the current premises at the Albert Plesmanweg in 2018 only made the atmosphere better. ’The open office layout means a quick discussion is easy, and there is more mutual understanding.’  says Peter.

What’s more, he feels the team spirit and mutual collaboration are really nice: ’At Ritra, they try to get the best out of every person. Mistakes are rectified and then used as learning opportunities.´

A great end to a nice intermezzo with one of our employees. Many thanks to Peter for his time and sincerity!

Are you curious about other Ritra Cargo employees? Take a look at our Team on the website.