You are here: Home > News > Details of the mega alliances and co-operation between HMM + 2K

Details of the mega alliances and co-operation between HMM + 2K

It has been known for a while which shipping companies will fall under which alliance from April 1st. The corresponding sailing schedules were not clear yet, but now these are also published. In addition, the new HMM and 2K consortiums have launched. In this partnership, HMM’s focus will lie on the Inter-Asian and Trans-Pacific routes. What does this mean for all shipments from the far East to Europe?

Further details on the mega alliances 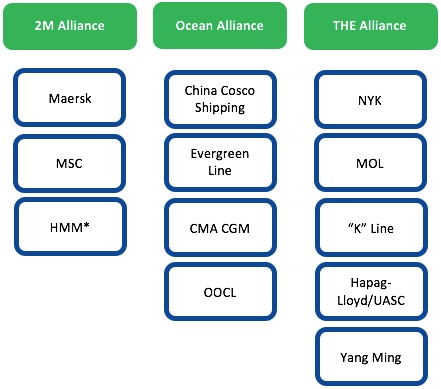 In total, these three alliances will have 17 weekly departures from the Far East to Northern Europe. These will be divided as follows:

Almost all of these departures have Rotterdam as the first port of call in Europe.

Hyundai Merchant Marine (HMM) has entered into a partnership South Korean shipping companies, Sinokor and Heung-A Shipping. Since March 1, 2017, they have jointly formed a strategic alliance with HMM + 2K for the intra-Asian and trans-Pacific routes.

Via the new consortium HMM can save on costs. They also benefit from the financial support of the Korea Shipping Company. This investment company, set up by the Korean government, is investing $626 million in the company. The new consortium and funding have led to sales growth and a stable financial position for HMM.

The partnership enables HMM to further improve its competitive position relative to the major container shipping companies. Furthermore, they have made the decision to not ship any more cargo themselves between Asia and Europe. Goods can be delivered to Europe via HMM, but this happens through a final agreement with the 2M Alliance.

To further grow and realise greater market share, earlier this year HMM acquired more terminals from bankrupt company, Hanjin. In addition, they have plans to purchase more ships in the future.