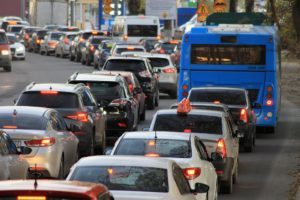 In the Netherlands, the beginning and end of the summer holidays are spread over several weeks. In other European countries, this is not the case. Here, everyone starts their vacation at the same time. In order to take some strain off the mass vacation traffic, July and August are often subject to additional driving bans for freight traffic. This year, these have been suspended in several countries as a result of the corona crisis. When and where do driving bans still apply, and what should you take into account in your planning for European road transport?

The summer period has a significant number of days with driving bans for freight traffic. Loading and unloading is therefore not possible on these days. In fact, this is often also very difficult the day before and after the driving ban. This is because European freight traffic covers long distances and is often unable to unload cargo at the destination on the day of departure.

If there is a driving ban in the weekend in France, for example, it is impossible to unload cargo on Monday morning at 06:00 in France. Deliveries on Friday afternoon are also difficult. Generally, freight trucks do not return without new cargo. On Friday afternoon, there is very little time to load new goods. In this case, the carrier may decide to send the freight truck back empty before the driving ban comes into effect. The trip can also be postponed until after the weekend. Both cases often result in a surcharge.

We recommend taking the driving bans in Europe in mind when making your planning. Make sure to also remember the route the freight truck will have to travel through other countries subject to travel bans. That way, you can avoid unnecessary delays and costs.

Generally, driving bans for freight traffic apply on Sundays and official public holidays. In some countries, this driving ban is extended in July and August. The corona crisis has led to an exceptional situation, as a result of which driving bans in some European countries have been suspended entirely.

The overview below shows which driving bans apply to European destinations where Ritra Cargo often loads and unloads cargo for its clients.

Belgium does not have driving bans for freight traffic.

In Germany, the usual summer driving ban on Saturdays has been suspended for certain states. In Mecklenburg-Vorpommern, Lower Saxony, North Rhine-Westphalia, Schleswig-Holstein, Rhineland-Palatinate, Saxony-Anhalt, Thuringia and Baden-Württemberg, driving bans do not apply in the months of July and August.

No freight traffic is allowed on roads in France during the weekend from Saturday 22:00 till Sunday 22:00. On public holidays, this driving ban also applies from 22:00 on the preceding day until 22:00 of the day itself. Tuesday 14 July is a national holiday in France.

In addition to the standard driving ban on Sundays and public holidays, France also has so-called Black Saturdays. On these days, the French roads are exceptionally crowded due to holiday traffic. The Black Saturdays in 2020 are predicted to take place on 11, 18 and 25 July and 1, 8, 15 and 22 August. On these days, freight traffic is not allowed to use the roads between 07:00 and 19:00.

Due to the coronavirus, all driving bans in Italy have been lifted indefinitely.

In Italy, every Sunday is subject to a driving ban for freight trucks heavier than 7.5 tonnes. Normally, this ban is in effect from 09:00 to 22:00. In July and August, however, the driving ban starts earlier, at 07:00.

Spain has a highly complex schedule of driving bans. They vary per region, road and/or day. Generally speaking, Spain only has a driving ban for hazardous goods on Sundays and public holidays from 08:00 to 24:00. In case of public holidays, this ban comes into effect earlier, on the preceding day (with the exception of Saturdays) at 13:00.

Note: generally speaking, driving bans in Europe apply to freight trucks heavier than 7.5 tonnes. In Switzerland, this weight threshold is lower. For freight trucks, the maximum permitted gross weight is 3.5 tonnes. The maximum mass for combination trucks is 5 tonnes.

Driving bans generally apply to freight transport heavier than 7.5 tonnes. There are, however, exceptions to this rule. For example, transport of perishable goods is often excluded from driving bans, as are live cattle. The exceptions differ per country.

For the most up-to-date situation with regard to the corona crisis and travel bans, please refer to the TLN website (Dutch). Of course, you can also always contact your Ritra Cargo contact.

This overview was compiled with the utmost care. We are, however, dependent on third-party information. This means the overview may not be completely up to date.