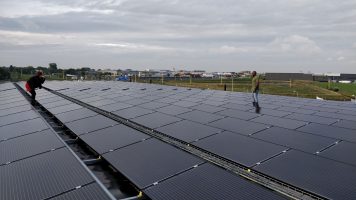 Ritra Cargo’s team page is one of the most popular pages on our website. Makes sense really, who wouldn’t want to see the people behind the ‘Ritra Cargo Team’? Who arranges the import and export shipments, who takes care of your clearance documents? The answers are on our team page, which now features brand new portraits of our staff!

A backdrop of containers and aircraft

Ritra Cargo’s team page has been a regular feature on our website since 2016. And right from the very beginning it has been one of the most popular. However, after three years it was time for a revamp. Colleagues who wanted to be photographed were given the opportunity to display a new image. This time we dropped the neutral white background in favour of something with a bit more panache, a shade more vrooom!

The colleagues in Rotterdam for example were photographed in front of a large stack of sea containers on a storage and transhipment terrain. Even during the photoshoot these containers were continuously on the move (without putting anyone’s life in danger of course). This gave us the visual interest of a different backdrop to every image.

Our airfreight colleagues were pictured on the roof of our Amsterdam office. There’s also an excellent view of Schiphol Airport between the solar panels from this spot. Every portrait has acquired an exclusive and singular atmosphere.

Have a look at our new team page here >

A peek at the Ritra premises

Apart from the portraits we’ve also created a number of images to give a fuller impression of our business. Most of the photos were taken at the Ritra Cargo Rotterdam office. The photographer produced some excellent work; she’s managed to capture the atmosphere brilliantly, naturally with our Ritra colleagues adopting a lead role. These photographs will also soon feature prominently on our website, as well as in our other online and offline communications.